Yes, it seems like an odd title for a post, but we recently replaced a shed dormer roof, the shed flashing and the flashing around a vent pipe. The only problem was, after we did the job, the home owner complained of a leak in the vicinity of our work. We went back out to inspect the job, including the head lap, side lap, broken slate, etc. The installation appeared to be fine. Everything began to point to a leak in the cast iron pipe itself. But after measuring the leak in the dormer from the front wall, the leak was actually several feet behind the dormer and vent pipe, unrelated to the work on the dormer. First, we inspected the keyways of the slate behind the dormer. Nothing. We had to resort to pulling slate. This yielded a slate that appeared to be normal, but where the slate above it overlapped, there was a dimmed sized hole in the slate. Yikes! This slate had a mineral deposit that eventually deteriorated enough to leave a hole. It was close enough to the keyway so that during a heavy rain or wind driven rain, a leak resulted.

I guess after eighty-three years of protecting the house, a few slates are allowed to yield to their faults. 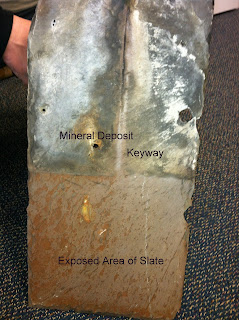 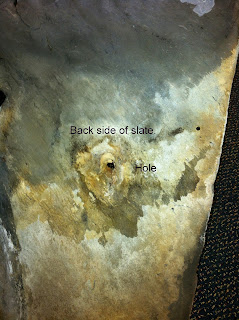 Pictures on left, front of Vermont Slate, right, back side of same slate.
Posted by David Robinson at 11:10 AM

Buying and Maintaining a Home with a Slate Roof, by David Robinson